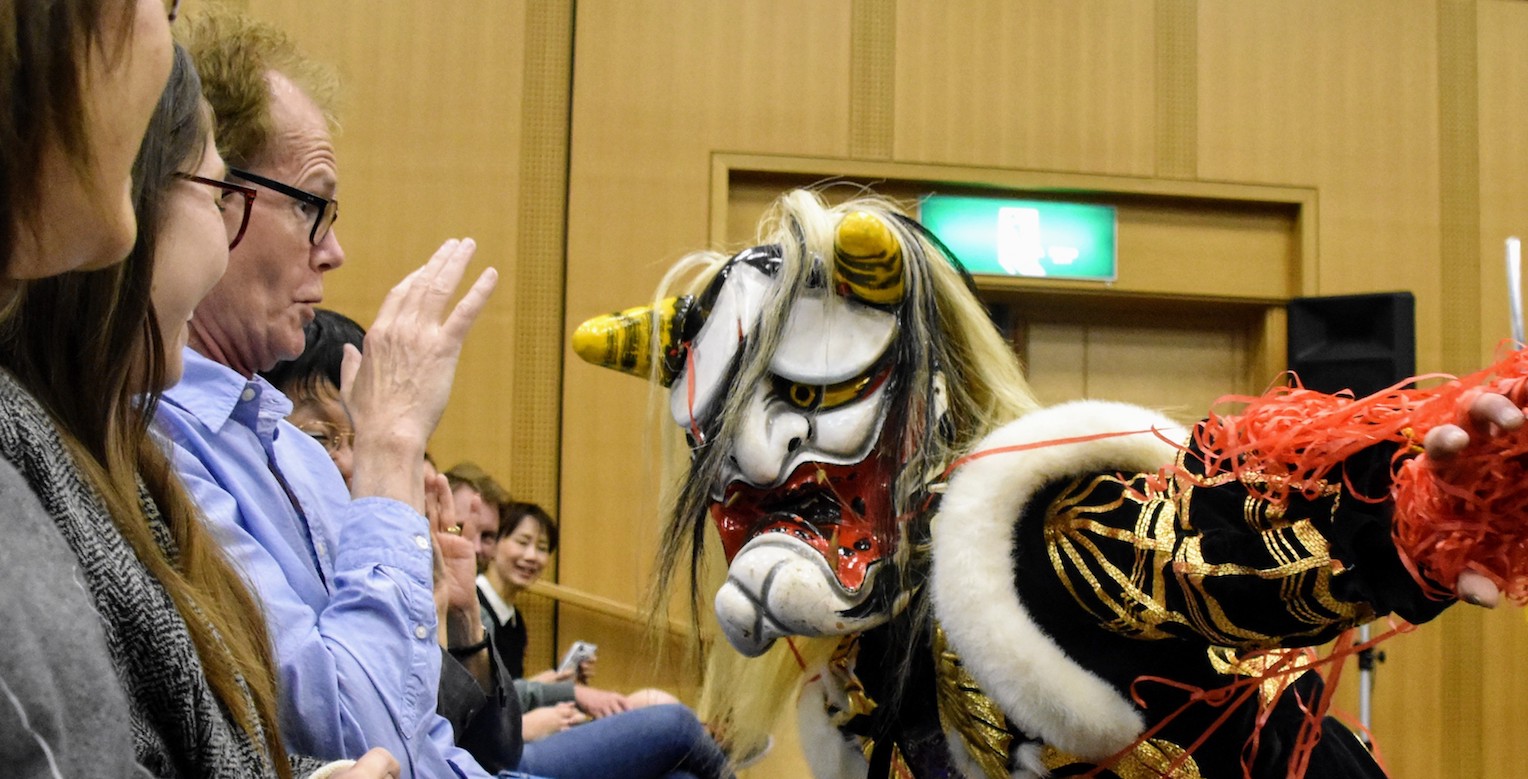 The ‘Evening of Kagura’ English Kagura Experience kicked off a season of 40 events on April 14. Aimed at giving the increasing number of overseas visitors an entertaining cultural nightlife option, the opening weekend was a great success and it was clear that both the audience and the performers had a great time.

The Tenjin Kagura Troupe from the kagura heartland of Akitakata opened the season with a performance of the legendary revenge tale Takiyasha-hime before a decent sized crowd of overseas visitors and residents, and a local TV crew. 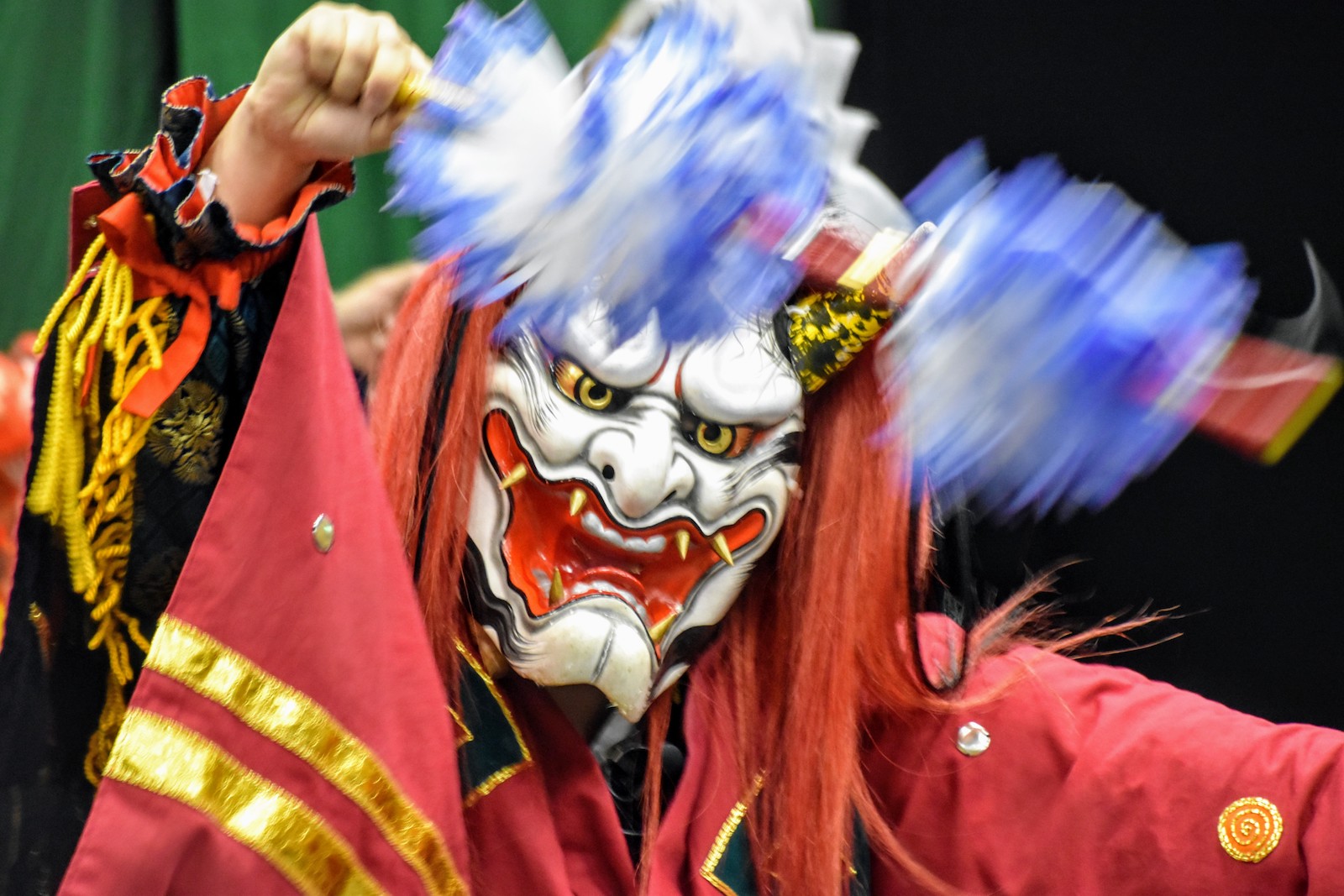 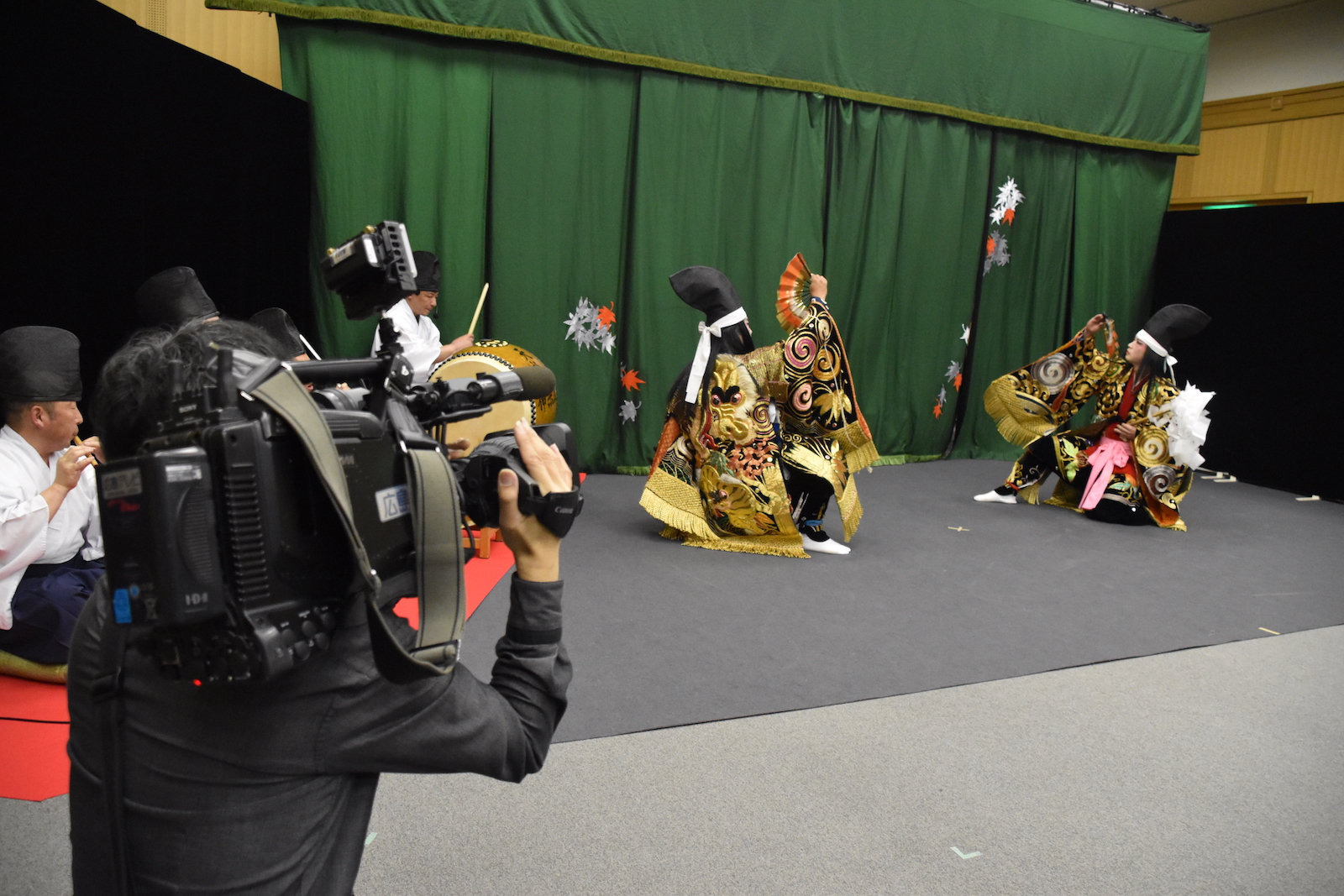 Takiyasha-hime can be a confusing piece. The audience finds itself rooting for the young woman who transforms herself into a demon to avenge her father’s death at the hands of the forces of the emperor, only to be let down when she is defeated in the climactic battle. In the version performed tonight, it is only the demonic persona of Takiyasha-hime that is killed and the princess returns to her former self and is ordered to spend the rest of her days as a nun praying for the departed souls of her family. Not perhaps a wholly satisfying outcome for the audience, but a happier ending than being killed that victors write, but the legends too.

On Day Two, it was the turn of the Asahi-ga-Oka Kagura Troupe. The audience were immediately taken with one the four musicians that provide the signature fast paced tempo of Hiroshima’s form of Kagura, a 12 year old boy playing the hand cymbals. 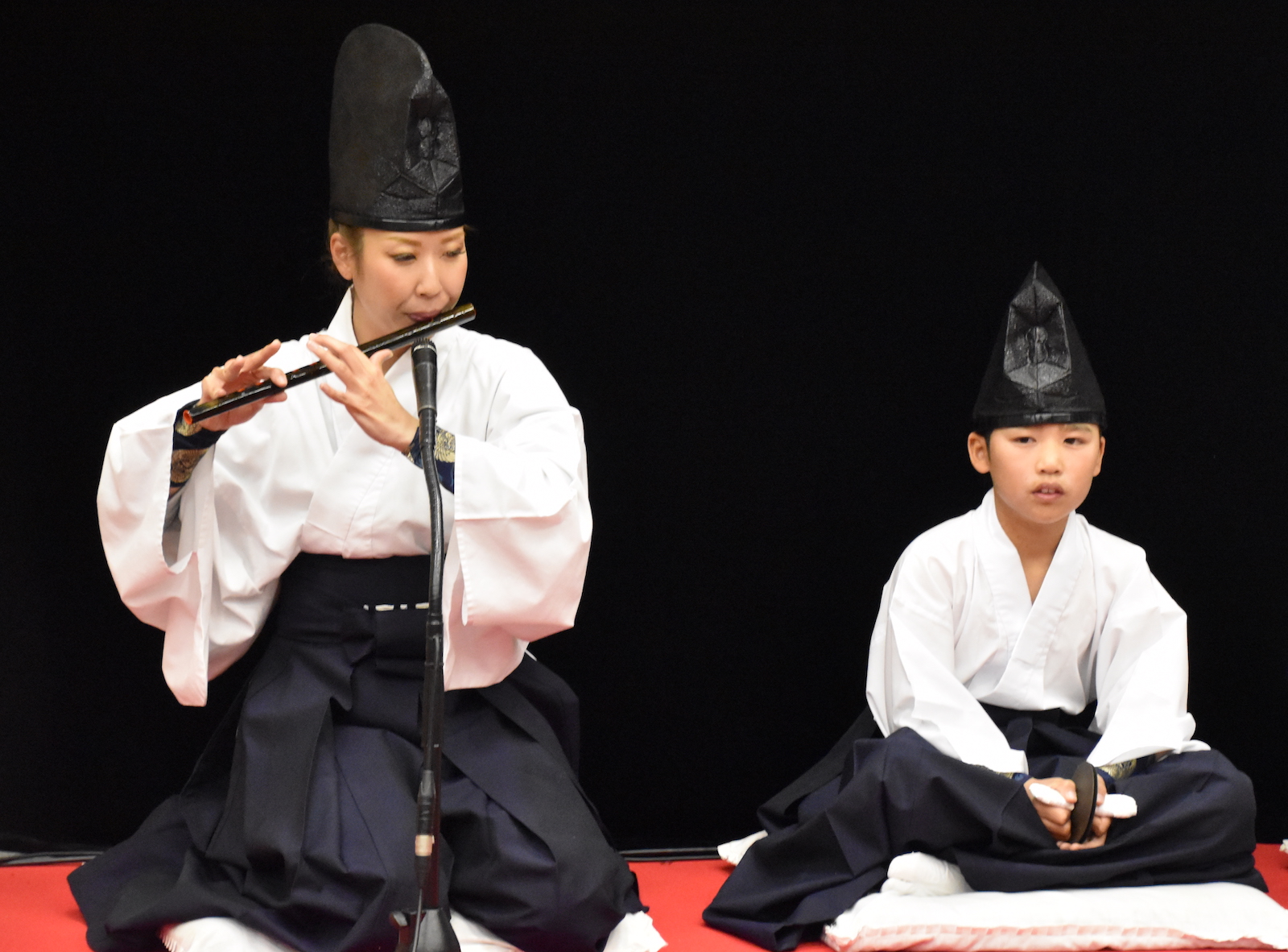 This evening, the performance was of the spectacular story of Tsuchigumo, a ‘spider demon’ as fearsome as it is cunning. 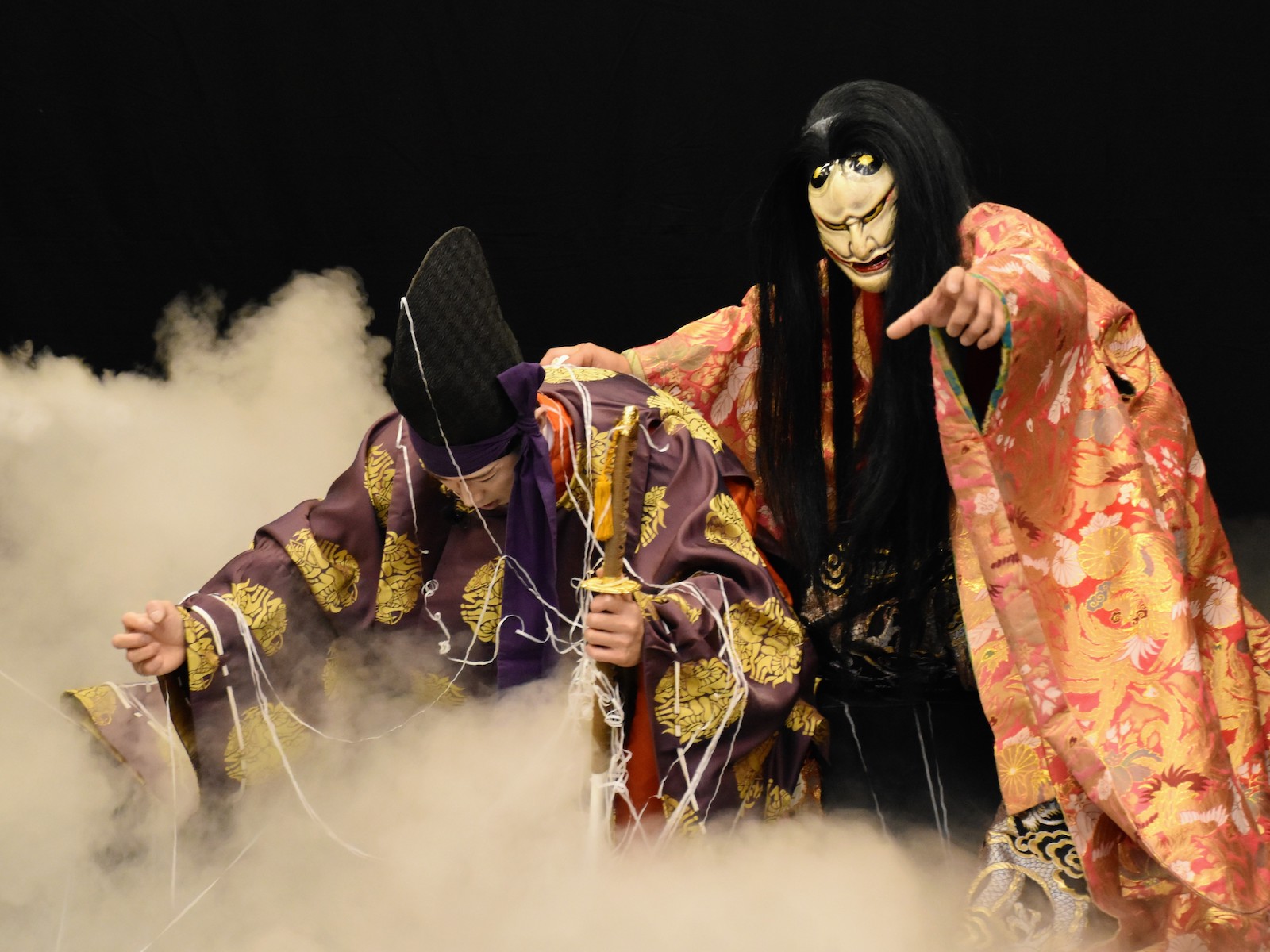 After a failed attempt by the shapeshifting demon to poison the emperor, it is inevitable that the tsuchigumo will get its comeuppance at the hands of the warriors sent to dispatch it. But it never goes down without a fight. And what a fight it is! Demon and warriors spin, swords clash and spider webs fly, as the tsuchigumo goes through a series of transmogrifications, getting ever more powerful. 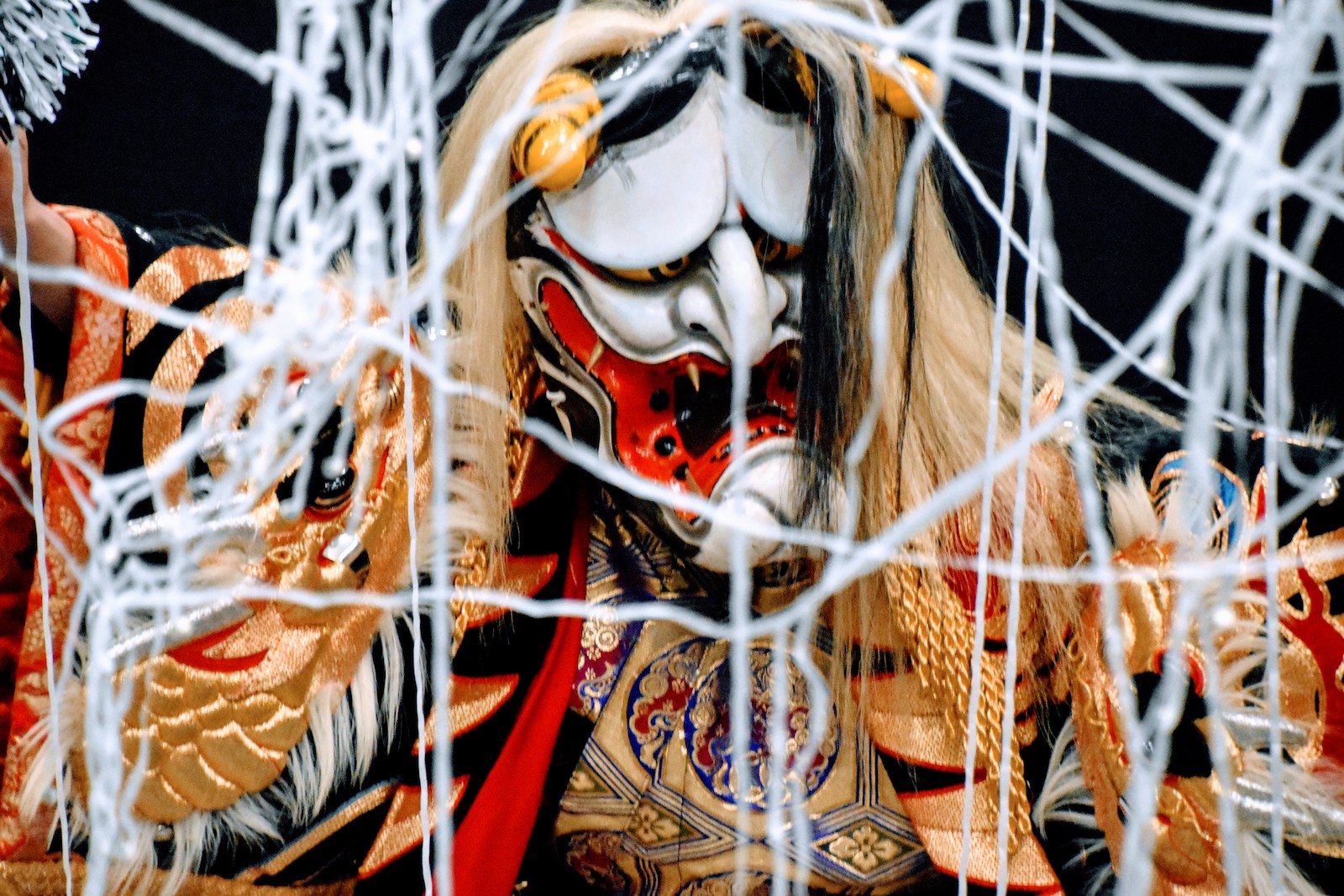 The tsuchigumo is often something a showman and on this occasion several audience members were nervously delighted to have a close encounter with the beast. It even posed for some photos mid-battle, flashing the peace sign and all. 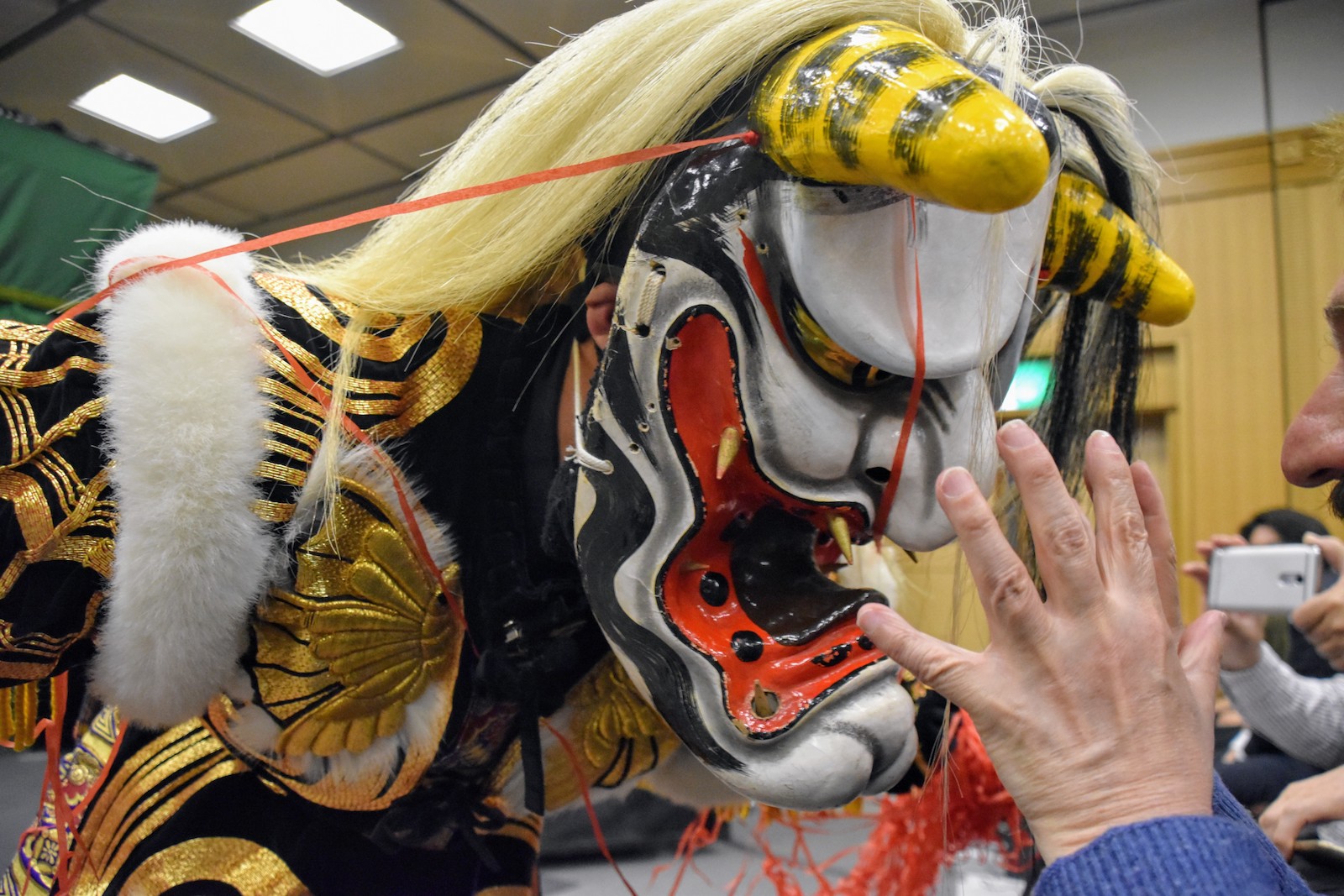 Explanations of what is happening and what is being said and sang on stage are displayed on a monitor and these were particularly detailed and impressive for Tsuchigumo, with the audience not missing out on any of the story. This, along with the explanatory video that plays while people await the start of the event and the introductory remarks by the bilingual MC, make ‘An Evening of Kagura’ an excellent window onto this art form that until recently was quite inaccessible to the short-term visitor.

The troupes themselves seem to thoroughly enjoy the performances and respond well to the claps, cheers and whoops of the crowd. On both evenings, the international audience came up with many interesting, and sometimes quite challenging, questions during the bilingual post-show Q&A sessions. The enthusiasm and interest shown by the international audience must surely be a source of motivation for the players who pour their passion into keeping this local tradition alive. 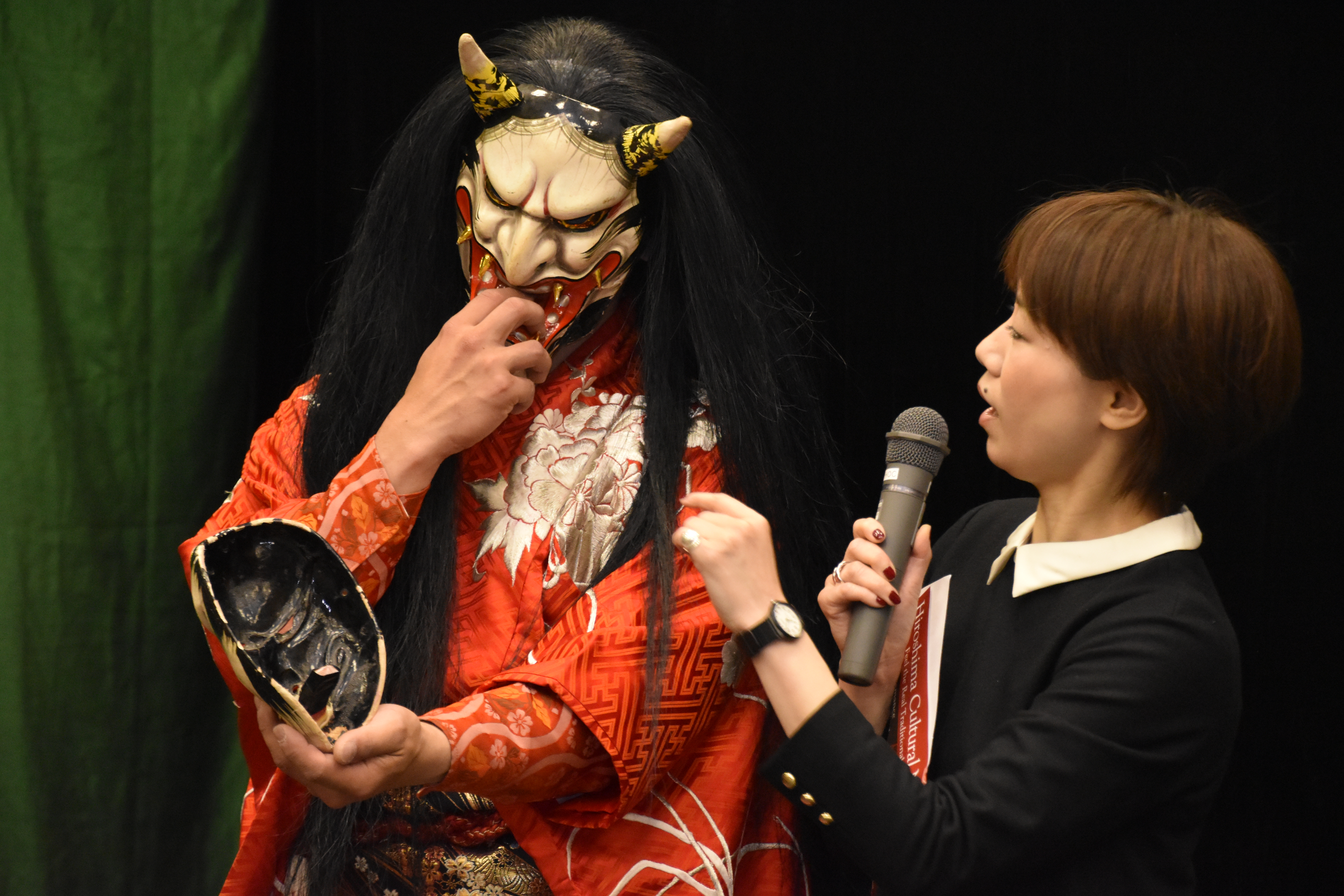 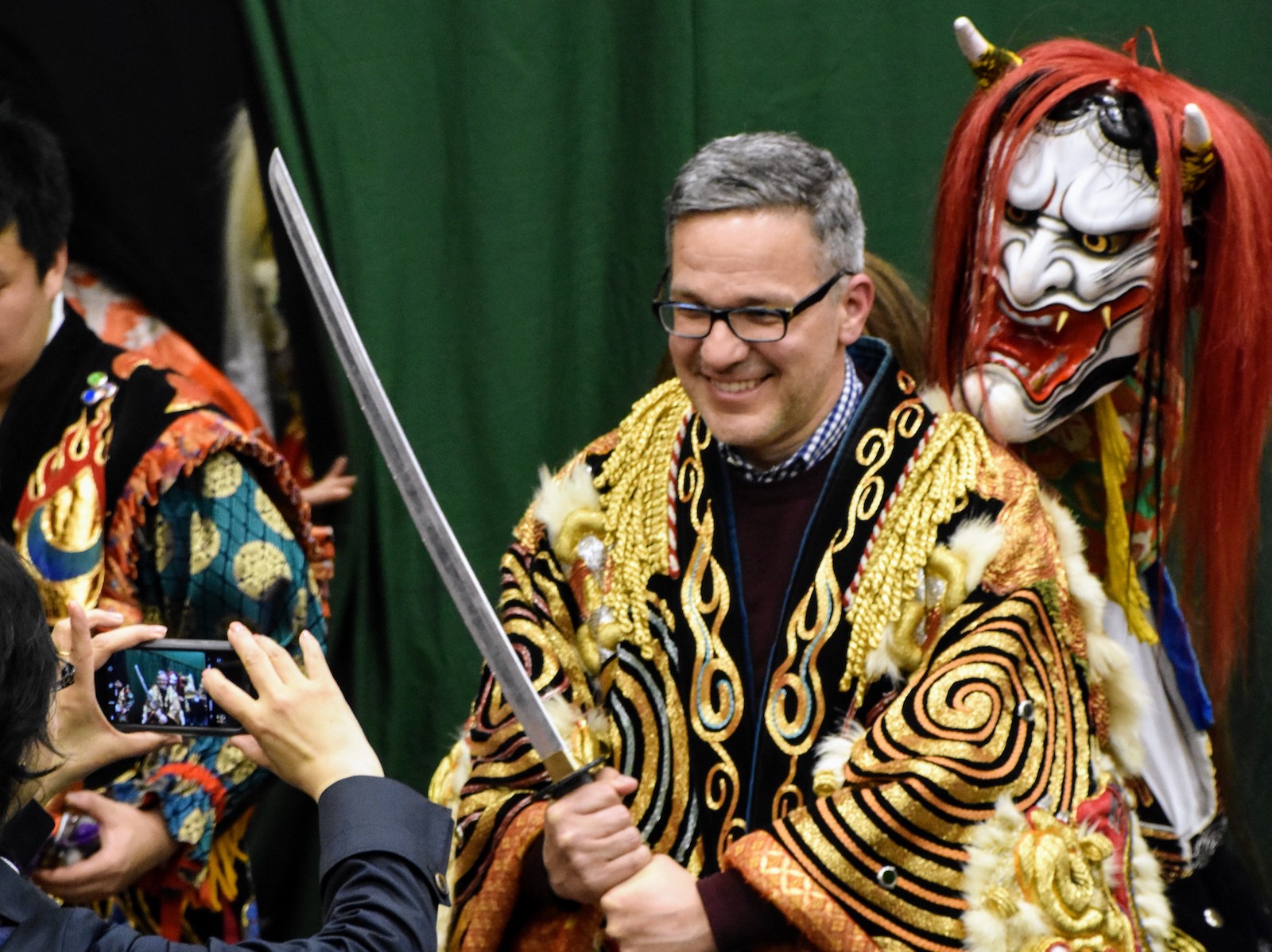 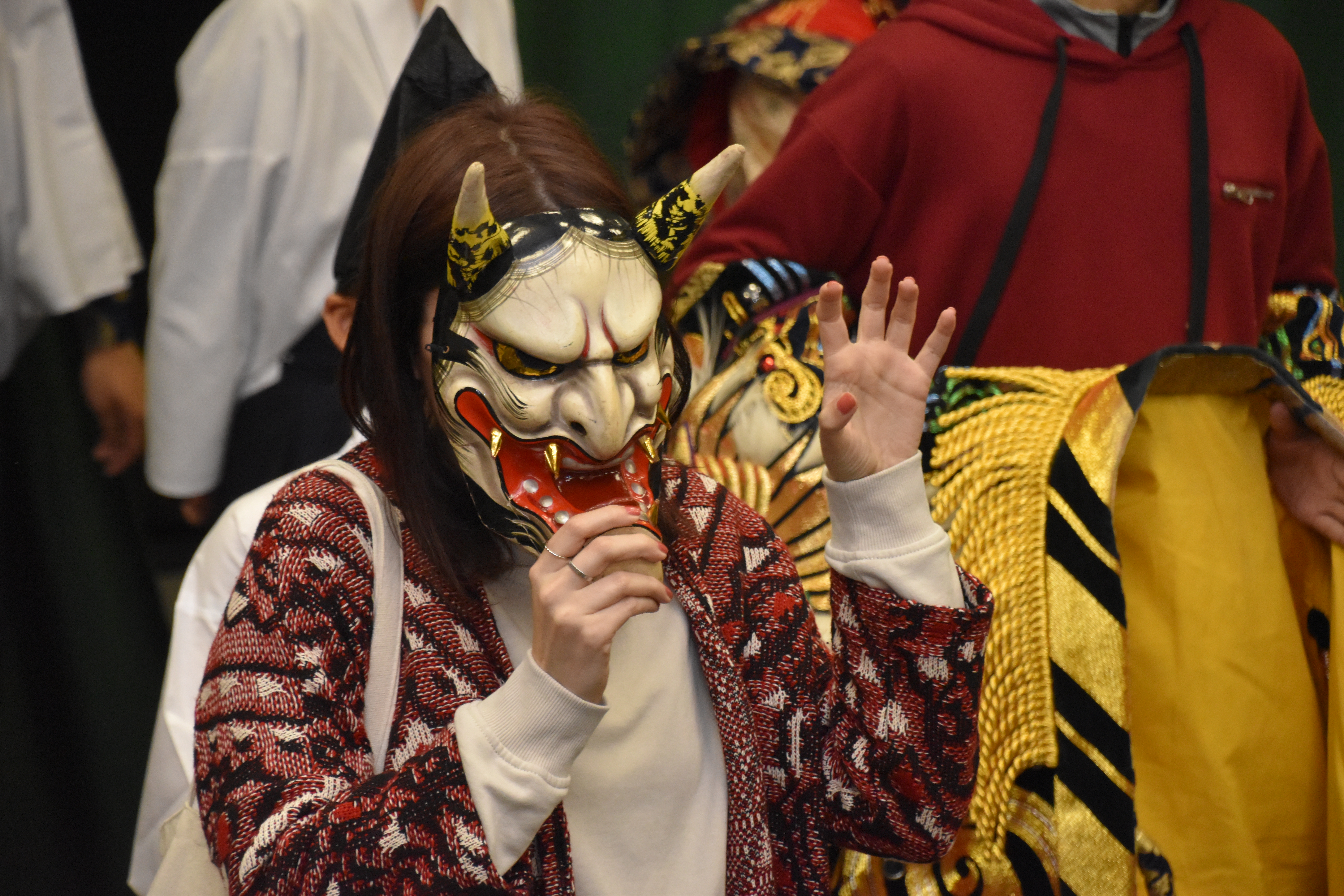 We highly recommend the ‘Evening of Kagura’ English Kagura Experience to both international visitors and residents alike. The event, held in the auditorium on the lower floor of the Prefectural Art Museum next to Shukkei-en Garden, continues until the end of the year with most performances on Saturday and Sundays, though there are some shows on Mondays. Please check the schedule page for details.